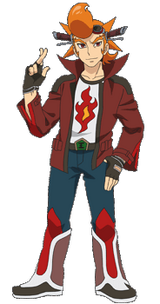 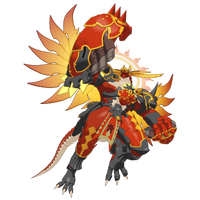 The Hundred Demon Hunter
This article is about the character. For the card, see Fourth Omni Fire Lord, Burn Nova

"Fourth Omni Fire Lord, Burn Nova", also known as "Ban Enma" in his human form is a character in the anime/manga of Future Card Buddyfight Hundred. After losing his memory, he became a self proclaimed "Hundred Demons Hunter", whose job is to hunt down and remove Yamigedo's curse (the demon mark) from the Hundred Demons Monsters and send them back to their own worlds. His Core Gadget is a hoverbike and an Omni Lord Emblem. He is voiced by Toru Nara (Japanese) and Brendan Hunter (English).

The Kanji for Ban's surname (炎魔) can translate to "Flame Demon", referencing his fiery personality and self proclaimed position as a "Hundred Demons Hunter".

The name 'Ban' comes from the transliteration of the word 'Burn' in Japanese.

Ban has orange hair shaped into a pompadour at the front with spikes and a small mullet behind it. He wears goggles with bike hands on it for his Buddy monster Dragon Kid, Ricky to hold onto as he activates his buddy skill. Ban wears a white shirt with a black collar and a fire symbol in the center as well as black fingerless gloves with white accents underneath a burgundy biker jacket with the collar flipped up and magenta and black accents. His jeans are blue with red and white accents, and they are held by a belt with a green buckle with the kanji for "King" engraved on it. He also has black shoes with a white stripe on the bottom.

As Fourth Omni Fire Lord, Burn Nova, his appearance is similar to that of Duel Sieger "Tempest Enforcer". He is a red dragon with beige accents that wears a golden crown with four horn-like extensions shaped like flames and "earrings" that are similar to those of old Chinese Emperors. The exhaust-like ports on the back of his body create "retractable" wings as well as a ring with a sun-like design. He sports gigantic red and golden gauntlets on his hands with spikes on his knuckles as well as grey armor with red an golden accents that cover his chest, his shoulders and his legs. He has four fingers on his clawed hands and three on his toes.

Ban is a reckless indvidual with a fiery temper, but cool attitude. He is very ruthless when it comes to hunting the Hundred Demons and often ignores the fact that innocents get involved. He has a strong bond with his Raging Spirits monsters, and considers their Lifelink, the punishment of their loss, a proof of their bond.

Despite his recklessness, he does not harm innocents if it would not help him in the capture of a Hundred Demons, and is actually quite caring, evident in his goal of removing Yamigedo's curse from the Hundred Demons and his concern for Gao.

Ban absolutely hates when anyone other than Ricky touches the bike handles on his head, when someone does, he goes into a blind rage and his Raging Spirits often have to calm him down. He tends to shout "BAN! BAN! BAN!" over and over when running off or chasing a Hundred Demons.

He initially refused to tell others his real name because he didn't know it at the time. His human alias is simply a name he picked up. Despite regaining his memories as the Fourth Omni Fire Lord, he retains his personality.

Ban first appears to beat down Baku Omori and Kuguru Uki who were possessed by Hundred Demons, much to Gao's dissaproval.

Sometime later, Ricky and Ban continue to brutally hunt illegal monsters and inadvertently call the Buddy Police's attention. When Gao confronts Ban, he and the Raging Spirits introduce themselves. Ban assumes the Buddy Police wants to steal credit for his catches. Gao challenges him to a fight, which Ban accepts under the condition that if he wins Gao would become his "errand boy", but forgets about it when a Hundred Demons monster appears.

Death Shido attempts to possess Ban, but his immunity to the Hundred Demons' control foiled the attempt, then Ban defeated Shido. After the fight, Ban told Gao his name and seemingly befriended him, but then Drum touched his bike handles, causing Ban to punch him and run off in a fiery tantrum while his Raging Spirit friends tried to calm him down.

When Ban heard that Gao lost his first fight with Ikazuchi, he and the Raging Spirits went to cheer him up and want to challenge them to a Buddyfight.

Ban also interrupted the battle between Gao Mikado and Mukuro Shigamine, and prevented Gao from losing.

It is revealed that he is an Omni Lord who entrusted Ricky with his emblem after being attacked by First Knight of the Apocalypse, Gratos and repressing his memories. Ricky reluctantly returned him his memories and revealed his identity as the Fourth Omni Lord, however his personality remained the same, much to Ricky's relief.

"Resistance": He has the ability to negate the power of the Hundred Demons to control individuals and do their bidding or be their Buddy Fighter for Buddyfights.

"Fire Punch": Ban Enma has enhanced strength. He can light his fists on fire and use them to attack his opponents with powerful punches. It is later revealed to be his main attack as a monster.

Purification: He has the ability to remove the Hundred Demon's Mark on the card of any Hundred Demons monster. This releases them from Yamigedo's curse, and allows them to return to their home Worlds. 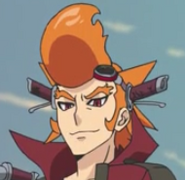 Ban and his Raging Spirit Monsters

Ban and his crew

Ban punches drum because he touches his bike handle bar

Ban filled with rage and unleashing some of his power.

Burn Nova after being called to center

Retrieved from "https://buddyfight.fandom.com/wiki/Ban_Enma?oldid=495880"
Community content is available under CC-BY-SA unless otherwise noted.