This article is about the character. For the card, see Black Death Dragon, Abygale. 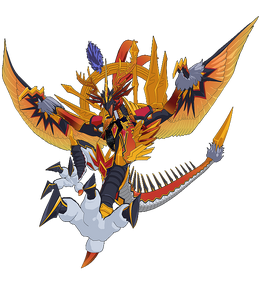 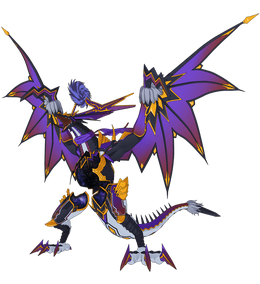 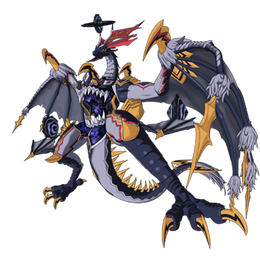 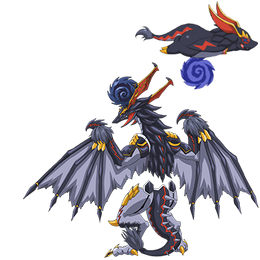 Black Death Dragon, Abygale, or simply "Abygale" is a character in the anime of Future Card Buddyfight Triple D and the buddy monster of Gaito Kurouzu. Fighting with his buddy, they aim to be the World Buddyfight Champion.

He is a clone of Azi Dahaka created by Kyoya to serve as a pawn in his scheme, though Abygale's role in that scheme is currently unknown.

He is voiced by Roger Rhodes in English dub and Kuroda Takaya in Japanese dub.

Abygale takes the form of a big, black dragon, having large wings and a red eyepatch on the right side of his face. He has a dark, spectral-like orb above his head, which apparently serves multiple purposes. His most notable feature is that the upper half of his body is separated from his lower half. This makes him appear quite intimidating, to the point that others become frightened by his appearance. His SD form, however, from top to bottom resembles that of a penguin.

In his new form, Annihilation Black Death Dragon, Abygale, his form includes a new wing color and eyepatch color: purple and yellow. He also has a purple scarf in this form.

In his new Overturn form, his color scheme changed from purple to red and gold for his wings and his eyepatch. He also has a red scarf in his new form.

On episode 32, his diguise was a gray and black kimono.

Abygale is shown to be strong willed and has a high opinion of his buddy, Gaito. He is obsessed with defeating Azi Dahaka. Even after Azi Dakaha gouged out his right eye, Abygale only wanted to defeat him even more. He wants to do this in order to prove that he's the strongest Black Dragon, but it was later revealed that he was genetically engineered to want to surpass Azi Dahaka.

He also shows great concern for his buddy's well being.

A short time before the start of Triple D, Abygale was once a member of Azi Dahaka's army of black dragon invaders. Discarded for being too weak, Azi Dahaka inflicted great injury to Abygale, including damaging his right eye, and left him barely alive in the outskirts of Darkness Dragon World. It was there that he met a wandering Gaito, and due to their similarities in loneliness and their desire for unyielding strength, they bonded with each other and became buddies, with both feeling that together, their shared goal was possible.

After Bal runs away and steals some pizza, he ends up meeting Abygale who takes him back to Gaito, apparently having told them that he was mistreated by Gao. When Bal remarks that he wants to be Buddy Champion so that he can eat all the pizza he wants, Gaito and Abygale point out that he can't enter as his own buddy. Since Bal doesn't have a Buddy, Abygale takes Bal in as "Bal Black Dragon". Gao and Bal eventually reconcile and challenge their pair to a Buddyfight which ended in their victory thanks to Abygale's unexpected Impact Monster form. After that, Abygale cleared the confusion that Gaito was stealing cards in that he was actually taking back the stolen cards of the elementary school players.

After Gaito received a challenge from Kyoya Gaen, Abygale became particularly eager to battle and prove his newfound strength to his former master. During their match, Azi Dahaka revealed that that he spared him before because he sensed a power in Abygale and desired to see his potential. Though initially consumed with his enemy, Abygale spurs Gaito to victory by reminding him of their shared goal. That evening, Abygale began to feel a strange sensation in his body, and swore to become far stronger so long as his missing eye throbbed.

Before Gaito's match against Wataru Kageo, Abygale witnesses the loss of "Vanishing Death Hole", but during the match, it is revealed that the strange sensation from the previous evening was his transformation into "Unlimited Death Drain".

During the Japan WBC Cup, Gaito and Abygale continue to beat out anyone in their path. In his last match against Shura Gokumon, "Unlimited Death Drain" managed to destroy Shura's Deck - making him lose from deck out. This causes the Dragon Force to temporarily resonate with Gaito. With that, Gaito aggressively orders Abygale, Unlimited Death Drain to use "Unlimited Death Drain" on Shura, to which Abygale refuses at first, but after hearing Gaito's scolding, he reluctantly does so.

After the events of Buddfight X, Gaito asked Abygale to look after his son as his buddy, and he temporarily became Black Dragon Knight, Geil.

Retrieved from "https://buddyfight.fandom.com/wiki/Black_Death_Dragon,_Abygale_(character)?oldid=496323"
Community content is available under CC-BY-SA unless otherwise noted.