Davide Yamazaki is a member of Disaster. His buddy monster is Death Dragon, Deathgaze Dragon, and he uses a Dark Core Deck Case in the shape of a black choker around his neck.

He is voiced by Akio Suyama (Japanese) and Chris Cook (English).

He is shown to be highly manipulative, like Kyoya in convincing Kiri to take the Dark Core Deck Case in order to fulfill Kyoya's plan. He shows some signs of being insane, such as his tendency to stick out his tongue and when he Buddyfights he sadistically enjoys using the "Spectral Strike" ability to damage his opponents. The more he fights the more he seems to act insane.

Davide frequently cheats during his fights with cards hidden in his pockets, but he often fails to add them to his hand without his opponent noticing. He strongly dislikes Gremlin.

His insane nature didn't change much in Buddyfight 100, as seen when he continues to bully other people and really hates the idea of "the Omni Lords saving the world". He also continues to cheat during his fight with Miserea, and when he loses the game to him, he is shown to be very angry.

After joining the Inverse Fiends he explained that he simply wants to be evil and Armorknight Cerberus described him as "rotten to the core".

He has black and yellow spiky hair and wears his Dark Core Case around his neck. Like the other members of Disaster, his hair becomes longer when he uses Disaster Force. He also wears dark purple jeans, black hip top shoes, a skull shirt with arm straps coming down, a black and silver wrist band, and a black and white belt.

He first appeared in episode 34 along with the other Disaster members. When he watches Gao's and Kiri's match, he asked Kyoya if he could fight them in the future, to which Kyoya agrees.

In episode 37, when he learns that Terumi failed to get Gao, he took over the duty to get Gao, Kiri, and Tasuku.

In episode 39, he witnessed Gao and Kiri battling by the other building of Aibo Academy.

In episode 41, he used his cheating scheme during the match with Gao. He even provoked Gao about losing his friend, causing Gao to be extremely mad at him. However, it did not end well as Gao paid him back by using Roaring Slash!! Gargantua Punisher!! in his final phase to deal 5 damage, which caused him to lose. Unable to accept his loss, Davide used Disaster Force and attacked Gao, however, Gao's Core Deck Case activates Future Force, which allowed him to make the power of Blue Dragon Shield real, allowing Gao to defend himself. Shocked that Gao can use Future Force, he retreated through a portal.

In episode 44, he teamed up with Noboru against Kiri and Rouga in a tag match with INV Eighth Omni Deity Lord, Devilgadez as his buddy, which he and Noboru lost. 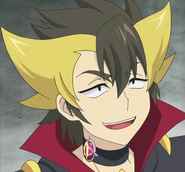 Davide getting the deck Gremlin made 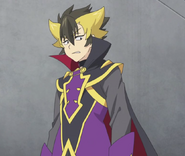 Davide suprised at the changes of his Life Points