This article is about the character. For the card, see Demon Lord, Asmodai. 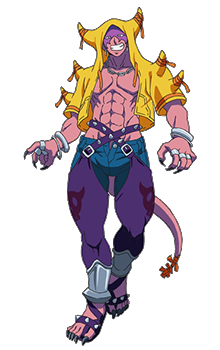 Unknown (Born at some point before human history)

"Demon Lord, Asmodai" or simply "Asmodai" is a character in the Future Card Buddyfight anime/manga, and is Tetsuya Kurodake's buddy monster. He is famous for having his own dancing show. In season 2, he is revealed to be Second Omni Demon Lord, Asmodai and a member of The Omni Lords.

He is voiced by Tetsuharu Oota (Japanese) and Lucas Gilbertson (English dub).

Asmodai is a tall, humanoid demon with a body-builders physique, pink skin, and silver eyes. Asmodai has pointy ears, horns on his shoulders and biceps, grey claws on his hands and feet, and a long tail. He also has numerous purple-colored markings on his body. There is a skull-shaped marking on the top of his head which extends onto his face. There are also numerous markings around his horns, and spine-patterned markings down his back. On the back of Asmodai's scalp he has dark, purple hair extending from the marking on his head.

He wears an open, yellow hoodie with orange accents. Horn-shapes appear on his head as well as his body, but the horns on his head are not present when the hoodie is down. He also wears unzipped, teal jeans, and deep, violet chaps which include spiked belts that cross around his midsection. Skull decals are on his thighs and buttocks, and a skull-and-crossbones decal is on his back. His footwear consists of spiked, violet sandals, and short, silver greaves. Also included in the outfit are orange wraps on his horns and tail, and silver jewelry including hoop-earrings, a chain-necklace, four bracelets, and six rings.

As Armorknight Asmodai, he retains some of his normal features, but he also gains armor plating on his legs, shoulders, horns, and various other places. Asmodai also gains blasters that he uses when his skill takes effect, a bandoleer of bullets, and a giant hammer he uses when he attacks. The hammer has a face on it that emotes in an identical fashion as the button on Tetsuya's cap.

As Second Omni Demon Lord, Asmodai, he wears a longer green hoodie with two horns above it. He has four blade-shape decoration in its arms.

Being a demon, Asmodai can be quite a trickster and enjoys playing jokes on people, usually either to teach them a lesson or all in good fun. Knowledgeable about the world of Buddy fighting Asmodai helps Tetsuya with sound advice about playing styles and encourages him to try his hardest and to never give up. Using his abilities to help out when he is needed and doing what needs to be done to help Tetsuya learn and grow as a person, even if it upsets his friend.

Despite his fun loving and carefree personality, Asmodai is actually very knowledgeable about Buddyfight and the various worlds, frequently sharing his knowledge with Tetsuya, but often adds jokes and/or riddles while doing so. This is likely attributed to his position as an Omni Lord. Asmodai has the ability to shape shift and create clones of himself, abilities he frequently uses to perform multiple tasks simultaneously as well spying on others.

Asmodai is rather secretive and tends to lie to others, because of this his actions are often misinterpreted and hurt those around him unintentionally, even though he always has good intentions.

A Magic World resident who became a famous entertainer on Earth. He regularly appears on popular TV shows. Despite his teasing and ridicule, he has a good relationship with Tetsuya.

In Episode 34, he uses his shape shifting abilities to become a Danger World monster under Kiri Hyoryu's request and is his buddy during Kiri's fight against Gao, then he gives Kiri some good advice about switching things up since he's only ever used one world.

In Episode 36, Asmodai explains to Tetsuya that the demons that are considered "bad" are those who are best friends with humans, and afterwards, stated that he's "as bad as it gets", meaning that he and Tetsuya share a very close bond as buddies and friends.

In Episode 58, his friendship with Tetsuya shone through once again; it was through Asmodai's clever efforts and encouragement that Tetsuya was able to win against a very skilled opponent, Sofia Sakharov, whom everyone thought Tetsuya stood no chance against.

In Episode 60, Asmodai is seen with representatives from all worlds discussing the strange presence they felt.

In Season 2, it is revealed that Asmodai is the Second Omni Lord. When the Omni Lords are discussing the world Yamigedo just devoured, Asmodai's voice can be heard. Later, Tenbu said that he knew Asmodai from somewhere but couldn't remember where, just like Count Dawn. When Ikazuchi attempted to capture Tenbu himself, Asmodai appeared to challenge him and used an orb as a Core Gadget just like the other Omni Lords. 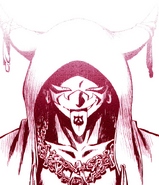 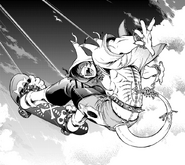 Retrieved from "https://buddyfight.fandom.com/wiki/Demon_Lord,_Asmodai_(character)?oldid=490572"
Community content is available under CC-BY-SA unless otherwise noted.