This article is about the character. For the card, see Demon Lord Dragon, Batzz. 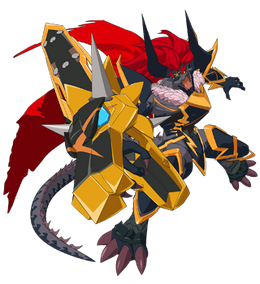 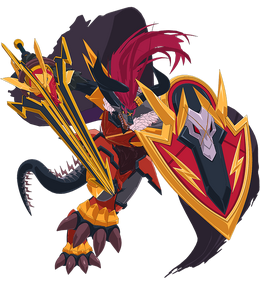 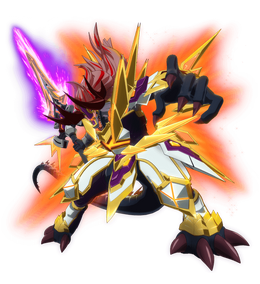 "Barlbatzz Dragoroyale the First", or "Demon Lord Dragon, Batzz", or simply "Batzz"  is a character in the anime/manga of Future Card Buddyfight X and is Gao Mikado's new and current buddy monster. He is a 'Lord' of his own army built in Dragon World called, "Thunder Empire".

He is voiced by Rikiya Koyama (Japanese) and Murray Farnell (English).

Batzz has the appearance of a very large dragon, much larger than either of Gao's previous buddies. He is dark grey in color with even darker shades on his arms, underjaw, legs, and various other points on his body. He has 2 long black bull-like horns, a red mane and red eyebrows, slit red pupils with yellow sclera, and dark green scales on his snout, with a notable "X"-like scar. He is clad in a black armor with golden highlights in a thunder design, along with a red fur-lined cape. His right arm is covered by a similarly colored gauntlet designed as a dragon head, which serves as his primary weapon when attacking.

His diminutive form leaves him more pudgy, with the fur, cape, and horns of his normal form remaining. The scar on his face moves upward upon his forehead, and his red mane is replaced with a simple spike. Another cross scar is also seen on his belly.

His new Thunder Emperor form is different; he still has his black horns, but the color scheme of his armour had changed to being mostly red. He has a shield and a thunder spear, and his cape is purple instead of red. He also keeps the X on his chest.

When he changes into his Turbulent Warlord form, his hair changes color to pink with red streaks. He loses the cape and gains 4 thrusters. He has a sword that can charge with purplish energy and a red shield gauntlet with an "X" on it on his other arm. His two horns split into three each and turn red. His armor's color scheme changes to white with purple and golden dragons with orange eyes on his shoulders and waist, and he wears a purple and golden crown on his head behind the "X" scar on his forehead. The "X" on his chest also changes color into a dull neon red and into a neon orange colour along with his scar and thrusters when he attacks.

Being a dragon of such extraordinary power that devastated Dragon World in its distant past, Batzz is arrogant, selfish, and knuckleheaded. In fights, he is extremely prideful, disobedient as shown when he continually disobeys Gao's strategy, and usually mocks his opponents, as shown when he gloats and calls CHAOS Yamigedo a weakling. He also calls Gao a fortunate fellow for surviving the power of his Impact. Despite becoming Buddies with Gao, Batzz clearly thinks little of him and considers his declarations as mere bravado.

Upon coming to Earth, Batzz reacts violently to his new surroundings and expects others to serve him, constantly lashing out with electrical discharges or shifting into his true form whenever he feels his greatness is threatened. Usually, his behavior is so extreme that Gao must continuously force him back into his chibi form himself.

However, Gao notes that there is goodness beneath his terrifying demeanor, though Batzz clearly hides this behind his usual self-centered boasting.

In defiance of his heated temper during battle, Batzz is shown to be very cautious and distanced in private, which is sometimes misinterpreted as part of his arrogance. He trusts no one completely and as a side effect of that, he is quite observant. Therefore, he easily sees through Sakate Onigashira's tricks and disguises.

Batzz's personality is similar to his younger years', though, ironically, he and the Thunder Empire were originally low dragons ordered to do the laundry and clean up after the higher dragons, which motivated Batzz to become the strongest dragon there was.

At an unknown point in history and for unknown reasons, Batzz nearly destroyed the entire Dragon World and because of that, he and his followers were sealed away. It was eventually revealed that Wisdom's ancestor was controlling him.

His imprisonment lasted until he was freed by Gao Mikado, who came to Dragon world in search for a new Buddy for the World Buddy Masters Tournament. Immediately after his awakening, he was forced to buddyfight against Sakate Onigashira and CHAOS Yamigedo. After Batzz and Gao won the fight, Batzz followed Gao to Earth.

Batzz evolves into his true form, Barlbatzz Dragoroyale after his original powers was returned to him.

Retrieved from "https://buddyfight.fandom.com/wiki/Demon_Lord_Dragon,_Batzz_(character)?oldid=491325"
Community content is available under CC-BY-SA unless otherwise noted.