This article is about the character. For the card, see Dragon of the Sun, Bal Dragon.

Dragon of the Sun, Bal Dragon 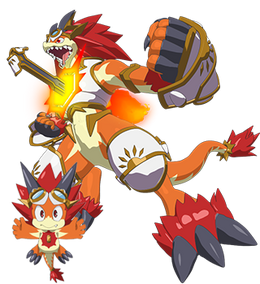 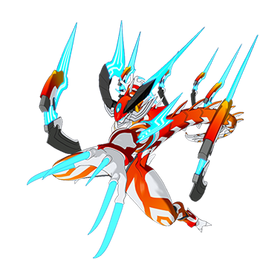 "Dragon of the Sun, Bal Dragon", nicknamed "Bal", is a character in the Future Card Buddyfight anime and manga, and was the second buddy monster of Gao Mikado. He is also the rival of Azi Dahaka, and his true form is the Super Sun Dragon, Balle Soleil.

He is voiced by Tomo Muranaka (Japanese) and Joseph Girgis (English).

Being a newborn, Bal is very childish and tends to get overexcited with simple things he finds interesting. Immediately after hatching Bal took a liking for Gao and is eager to learn about Buddyfight and the world. He has a habit of ending phrases with "Bal", which earned him his nickname. He also seems to have a habit of talking in third person, referring to himself as 'Bal' instead of 'I'.

Bal is shown to be rather immature due to not having much experience in the world, frequently throwing childish tantrums for petty things and not understanding when he does something wrong. Bal seems to have an enormous appetite and particular love for Pizza. (Much like how Drum loves Pudding)

After Bal Dragon transforms into his true form, Super Sun Dragon, Balle Soleil, his personality remains largely the same, however he matures slightly and gets depressed, along with an urge to fight and destroy Azi Dahaka when he first transforms.

In his baby form, he's an orange dragon with red hair and goggles on top on his head, and have a chest sword that resembles the sun.

In his adolescent form, he becomes a big dragon with his signiature red hair and goggles. His form also his chest sword changed form along with his size, and wore white dragon armor with golden sun color.

In his True form, he becomes an orangish red dragon with white spots. He has a blue gem on his chest & forehead, with his head having two black horns that have neon blue blades on top along with a blue visor covering his eyes and a silver mouthpiece. He also have long neon blue fingernails and six floating neon blue blades surrounding him and two more on his elbows.

In D Episode 1 - Sometime after Drum's departure, Gao bought countless packs hoping to find a new Buddy Monster. Ultimately he pulled a Buddy Rare card, but it became an egg. The next day the egg hatched into Bal. Bal at first seemed to be confused about the world, but soon became excited and happy about Gao and his friends. Kyoya appeared stating that Bal had come to Earth unauthorized and wanted to take custody of Bal. Bal refused to and agreed to fight Kyoya in a Buddyfight despite being unaware of what Buddyfight was. Noboru found a bunch of Sun Dragon cards in Bal's egg's leftovers which Baku used to build a new deck for Gao.

The next day Gao faced Kyoya using the new Sun Dragon deck which surprised everyone. Bal was amazed with the Buddyfight game and wanted to fight. Using his effect he was able to defeat Azi Dahaka and then revealed his real power, the Impact Monster which Gao used to win. With Gao's victory Kyoya acknowledged Bal as Gao's new buddy much to Bal's joy.

In D Episode 2 Bal was eager to play Buddyfight again but didn't know how the game works so Noboru tried to teach him the rules, only for Bal to not listen and break many game rules and think he won. Angered at everyone scolding him for not following the rules Bal ran away in a tantrum and ran into Jackknife Dragon who taught him how to play the game correctly. With Jack's advice and some help with Gao, Bal won a Buddyfight properly.

In D Episode 3 Bal and Gao had an argument about Pizza which resulted with Bal running away and ran into Gaito Kurouzu and Black Death Dragon, Abygale. Gao soon apologized by giving a large amount of Pizzas to Bal which he rapidly accepted. Gao challenged Gaito to a Buddyfight, however during the fight Bal ate so much pizza that he ended up being too fat to fight properly which cost Gao the fight.

Retrieved from "https://buddyfight.fandom.com/wiki/Dragon_of_the_Sun,_Bal_Dragon_(character)?oldid=469133"
Community content is available under CC-BY-SA unless otherwise noted.