"Extra Boosters" (エクストラブースター Ekusutora Būsutā) are packs of cards that are used to build or edit decks with new cards, but are separate from the standard Booster Sets. Each pack contains 5 random cards out of 48 different cards available.

As of June 5, 2015, this series is replaced by the "H (Hundred) Booster Set" series in the Japanese format, and as of June 6 in the English format. Both of them add Secret rare to ratio of rarity, as well as add an additional R in each pack. 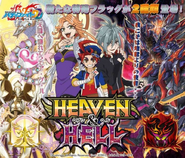 D-EB03's Japanese advertisement
Add a photo to this gallery
Retrieved from "https://buddyfight.fandom.com/wiki/Extra_Boosters?oldid=278773"
Community content is available under CC-BY-SA unless otherwise noted.