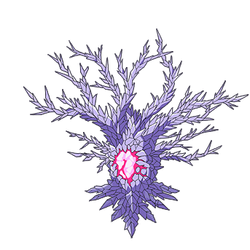 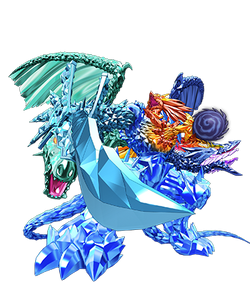 Gemclone
This article is about the character. For the card, see Fake Replica Weapon, Gemclone

Fake Replica Weapon, Gemclone, is a character in the anime of Future Card Buddyfight Triple D and the buddy monster of J Genesis. It first appeared with J Genesis during the WBC Cup World Championships. Later, it is revealed that Gemclone was created by J Genesis using a rare metal from Hero World called "Gem" and other monsters.

A new superhero who suddenly appeared in Hero World. Even though he resembles a Darkhero who tried to start a revolution, his identity is shrouded in mystery. "Gemclone", a being that imitates and reproduces everything, has transformed to be his cloak. "Gemclone" has created a pseudo world called the "Mirror World" inside the cloak, and from there, superheroes resembling those from Hero World are summoned.

.... He used to be someone consumed by greed. He sacrificed many lives for the sake of his own ambition and avarice. Is this the punishment to face and compensate for his sins? What does he wish for at the end of everything? Confronting all the dead that he left in his desire for everything, he thinks. He can't find an answer yet. But he can still move forward. Because there is now a buddy who supports him.

Similar to Bal, Gemclone has a young and curious Personality. However, it shows a more pessimistic view of life due to being treated as nothing more than a tool by J Genesis. Gemclone, however, shows no personality during a buddyfight - It just simply follows what J Genesis told him, without hesitation, reluctance nor pleasure.

Gemlone was thought to be a mindless tool, but due to the fact that J Genesis put so much soul, heart and effort into creating and evolving it. Gemclone developed an emotion of its own.

After Gemclone developed its personality, Gemclone does not hate J Genesis for using him as a tool. Gemclone, instead loved him as his "Father" - The man who created him.

Gemclone first appears as a monster under development.

It is first revealed during a fight between J Genesis and Gaito Kurouzu . Much to everyone's shock, Gemclone transformed into "Bal Dragon, "Bal Burst Smasher!!" and finished off Gaito.

During J Genesis's fight against Tasuku Ryuenji, it is revealed that Gemclone is an artificial monster, like "Star Deity Dragon, Zodiac", created by a monster. - This information is taken from Doctor Gara, who told the Buddy Police that J Genesis came in contact with him to sell many "Shell" to him - "Shell" is a lifeless body of a monster. After the revelation, Genesis proceeded to turn this card into "Abygale, "Unlimited Death Drain!", and then "Vanishing Death Hole" just before he finishes off Tasuku.

Sometime later, Gemclone evolves into Gemclone, "Origin Breaker" and is showed on television so  J Genesis can sell it secretly as a weapon. However, sometime before it's fight with Gao Mikado and Bal it telepathically contacts Bal so it can speak to him. When Bal reaches it, it proceeds to ask why Bal works so hard as it believes monsters are simply tools for humans. However, just when it reveals J Genesis's intention to sell it, Genesis appears and makes Bal and Gao leave. Though J Genesis wonders how they know about his intention to sell Gemclone Genesis dismisses the possibility that Gemclone was the one who told them.

During J Genesis' fight against Gao, Gemclone communcated to Bal, and tells him that J Genesis is his "Father", Much to J's annoyance. J then proceed to turns him into "Gemclone, "Origin Breaker!", and use "Bal Burst Smasher", "Galactical Punisher" and "Vanishing Death Hole" to turn Gemclone into an ultimate killing Impact with 5 Critical, Penetrate, with the attack cannot be nullified and the damage from Gemclone cannot be reduced. But Gao ultimately survived. As the Dragon Force resonates, Bal turns into "Super Sun Dragon, Balle Soleil" and defeated Gemclone.

Gemclone with Gaito Kurouzu
Add a photo to this gallery
Retrieved from "https://buddyfight.fandom.com/wiki/Fake_Replica_Weapon,_Gemclone_(character)?oldid=468866"
Community content is available under CC-BY-SA unless otherwise noted.