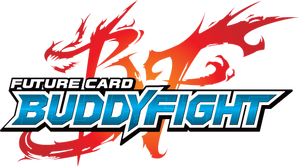 "Future Card Buddyfight" (フューチャーカード バディファイト Fyūchākādo Badifaito) is one of Bushiroad's Trading Card Games, officially announced on June 13, 2013.
This wiki provides the newest information and translations about this card game and other media related to it. The game was officially released on January 2014 in both Japan and the US, with an anime airing continually concurrent to the game's releases. Unfortunately however, Bushiroad has decided to end the continuation of the game on June 2020, and to terminate the support by the following year

For those who are new to Buddyfight or Card Games in general, take a look at the Gameplay & Terms page and learn about this card game. Also check out the Wiki's Policy and Rules.

Why I want to keep the Buddyfight simulator running

BuddyFight RE:Vival, a fan project to keep the game alive?!