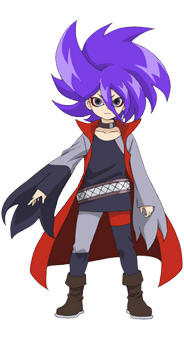 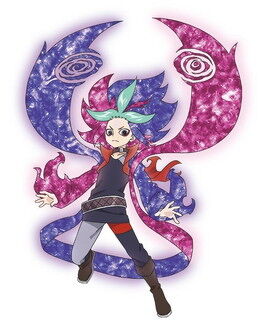 He is a former 6th grader at Aibo Academy. Fighting with his newly obtained buddy, Abygale, he is aiming to be the World Buddyfight Champion. On the side, he is also a renegade, battling higher class fighters for stolen cards, and giving them back to children.

He is voiced by Shouta Aoi (Japanese) and Adam Forward (English).

Gaito is commonly seen as rough and antisocial, and treats other people rather coldly. Even when those like Bal and Gao act kindly and approach with good intentions, he attempts to push them away. Gaito takes Buddyfight very seriously and has zero tolerance for those who use dirty tactics or mistreat cards. This goes as far as a severe obsession with winning and proving himself as the strongest, even claiming it as his 'destiny' to win every time. The fact that he has won every Buddyfight since becoming buddies with Abygale reinforces this belief. As such, when he experiences his first loss against Gao Mikado in the WBC Cup, he breaks down and punishes himself very harshly.

Gaito seems to be misunderstood and mistaken as a bad person often, but does not seem to care. He does what he feels the need to be done, in both in his own ambitions to be the Buddy Champion, and when it comes to helping others. He may have a soft spot for kids as he helps out Bal and the younger kids at Aibo often, probably because they don't see him as a bad person right away. Gaito has quadrophobia, due to his fear of cats.

In D Episode 42, it is revealed that Gaito doesn't deal well with social situations and crowds. He tends to hide from them every once in a while. In addition, he is embarrassed about coming to visit Gao's house to help Gao and his friends.

However, ever since Gao had helped him find Abygale after telling him to leave, Gaito had a sudden change of heart and became more helpful and friendly to Gao and his friends, and even helped them out with bigger problems.

A short time before the start of Triple D, Gaito was somehow able to travel to Darkness Dragon World, there he found an injured Abygale, critically injured after a battle with Azi Dahaka. Gaito brought him to safety, as the two discovered each others need to become the strongest as they bonded with each other, eventually becoming buddies.

Gaito is first seen on a deserted street at night, where he is seen Buddyfighting an unnamed character. Gaito tells him that he isn't worthy of "that card" and Abygale adds that the unnamed fighter doesn't understand Gaito's power before the camera pans away as the unnamed fighter screams in pain.

After Bal runs away and steals some pizza, he ends up meeting Abygale who takes him back to Gaito, apparently having told them that he was mistreated by Gao. Gaito was trying to tune his deck for the WBC and doesn't want to be disturbed. When Bal remarks that he wants to be Buddy Champion so that he can eat all the pizza he wants, Gaito and Abygale point out that he can't enter as his own buddy. Since Bal doesn't have a Buddy, Abygale takes Bal in as "Bal Black Dragon".

Later, Gao was in school when Kuguru and Baku informed him that some middle school students were card-hunting. So, they go to help where they see Gaito standing over some defeated fighters and taking their cards, causing Gao and his friends to assume that he is a card hunter. Gao challenges Gaito to a fight, but Gaito points out that he doesn't have a buddy. When asked how he knows this, Gaito reveals that he has taken Bal under his wing.

Later, Gao remembers the promise he made to Bal and buys 40 pizzas to share with Bal to prove that he was sorry for breaking it. Bal forgives Gao and rejoins his deck. Gao once again presses Gaito on why he is card hunting, and Gaito replied that if Gao wanted to find out he would have to buddyfight him. Gao almost won by using Bal Burst Smasher, but was unable to cast it because Bal had eaten too much pizza to transform or fight effectively. Gaito then won using his own Impact Monster. After the fight, Gao asks why a passionate fighter like Gaito is card hunting. It was eventually revealed that Gaito wasn't card hunting, but actually winning back the cards that card hunters in the middle school stole from other students.

A few days after the battle with Gao, Kyoya Gaen challenges Gaito on the pretense that his buddy challenged them. Gaito and Abygale meet Kyoya at Gaen Tower. They fight as Abygale reveals his history with Azi Dahaka, originally one of Azi`s lackeys until Azi Dahaka became sick of his weak power, only sparing him as Azi saw a small unknown power growing inside Abygale. Gaito wins the fight as they depart to prepare for the WBC.

As they make it to the Best 8, they are pitted against Wataru Kageo, a Shadow Shade User. As he prepares his deck in the storage room, Wataru uses his buddies shadow powers to hide in Bals Shadow (Bal was giving pizza to Gaito at the time) and take Gaito`s Impact Monster. As Bal felt hurt for what he did in the plan, he goes after Silhouette Joe to get the card back, while Gaito already knows that even without Vanishing Death Hole, victory is assured. All through the Match, Wataru pushes Gaito to 1 life on his first turn. Gaito counterattacks with a continuous rush of attacks before finally unveiling a Second Impact Monster, a new power of Abygale that beats Wataru and scores him his Best 4 Spot. At his home, Wataru sets up a trap to send Gaito to a Shadow Dimension, however Gaito appears behind Wataru, intimidating him and forcing him into the Shadow Dimension, as he watches Joe and Wataru be sucked to another realm.

Before the next match against Gao, Bal pays him a 'visit' to answer what he had said earlier about Buddyfight being more than a game. After much pressing, Abygale steps in and tells Gaito he would like the answer too. Gaito explained tht Buddyfight was a way for him to prove to the world that he was the strongest. Gao, who had come to pick up Bal, overheard the conversation and asked him if what Gaito had said was true. The next day, during the match, both players called Impact Monsters. Gao's first Impact monster was blocked by Black Dragon Shield and gaito called his new Impact Monster again. However, to the surprise of Gaito, Gao blocked Abygale " Unlimited Death Drain" and procceed to win the match. After losing, Gaito was so shocked that he screamed in frustration in front of everybody and punished himself harshly.

When the WBC cup Japan Qualifier started, Gaito seemed to be the only one who had refused to go with everyone on the Cetecea Boarding academy's ship and instead asked to be brought to the tournament alone by a helicopter, stating that he did not have intentions " To be nice to everyone". He also wanted to get the dragon force, the ultimate dragon power, which was rumoured to be on the island they were going to.

During the Japan Qualifiers, Gaito was an extremely strong contender and rose his way up to the top very fat. On the way, he met Sayuri Gotsurugi, who said she knew some information about the Dragon Force, but would only reveal them if Gaito fought her grandson. Gaito thought he would be able to get the Dragon Force this way and agreed. However, just as he was about to fight Tenka Gotsurugi, Gao's Paru-call activated, so he had to wait for Gao's fight to finish first. During the match, Sayuri asked Gaito why he wanted the Dragon Force, in which he replied that he wanted to be the strongest. So, Sayuri decided to fight Gaito by herself. Gaito, thinking that Sayuri has the Dragon Force, wanted to impress her and won without taking any damage. However, Sayuri said she made no promises about granting the Dragon Force to Gaito, which made Gaito very frustrated. Sayuri told him the Dragon Force was the messenger of light's soul and Gaito could not redeem it through force.

After Tasuku Ryuenji's 100th match, the Dragon Force responded to Tasuku, which frustrated Gaito as he wanted to get it. However, after his own 100th match, he finally redeemed the Dragon Force, making him very satisfied and ordered his Buddy to attack his opponent, Shura Gokumon and even claimed Abygale did not deserve to be his buddy when Abygale refused to do so. However, due to not having an open heart, the Dragon Force left him.

Before the WBC cup, Gaito found out Gao also released the Dragon Force, making him more angry and questioned why Gao even deserved it. Finally, after Tasuku obtained his own Dragon Force, he threw a tantrum and broke down.

After losing his match, he learned that sadness is born from a weak heart; which triggers his Dragon Force. Following his gift of the Dragon Force, he apologizes to Abygale and forgives him.

During his rematch with Kyoya, it is revealed that his personality has changed; while he does feel hatred or resentment, he feels grateful for having Abygale as his buddy and having the Dragon Force makes him a better person.

After their return to Japan for Gao's training to end Dragon Drei, he, Tasuku, and Gao are surrounded by fans, where it is revealed he doesn't get well with social crowds. He and Tasuku also watched Gao Buddyfight with Kiri. After watching Gao's Buddyfight, Gaito and Tasuku decided to take down Dragon Drei.

Both Gaito and Tasuku have agree to stop Dragon Drei, but they started to disagree; which lead them to buddyfight each other and settle the score. After Gaito's victory, he and Tasuku discuss the evolution of Dragon Force and how to defeat Dragon Drei.

During his rematch with J Genesis, Gaito's Dragon Force has evolved into Dragon Force "Style of Retaliation" and defeat J Genesis in the end.

Gaito and Tasuku both confronted Kyoya in a 2-on-1 Buddyfight, both of them used their fully evolved Dragon Forces. However, Kyoya used Dragon Drei to defeat both fighters at the same time.

After their crushing defeat, he and Tasuku train Gao to defeat Kyoya and end the creation of Dragon Drei. When the training ended, Gaito and Abygale decided to go to Los Angeles with Gao and the gang.

During Gao's match with Kyoya, he and Tasuku tried to stop Kyoya and Gao's Buddyfight in their evolved Dragon Forces (without their core gadgets) in order to prevent Kyoya from using Dragon Drei. Their plan was to use their evolved Dragon Force along with the safeguards that are protecting Jackknife and Abygale to scope the Buddy Stadium. After Gao's victory and the plan to stop Dragon Drei, he and Tasuku reconciled and congratulated each other by a handshake.

At the beginning of Buddyfight X, Gaito challenges Gao to a buddyfight, in order to calm down Batzz, who went on a rampage, because he stored too much energy.

Later, Gaito was chosen as the representative for Darkness Dragon World in the World Buddy Masters tournament. Thanks to his new Instant-Win-Impact "Death Count Requiem", he was able to beat Dai Kaido in a heated battle, but got defeated by Kanata Ozora with the "Asterism Effect" spell.