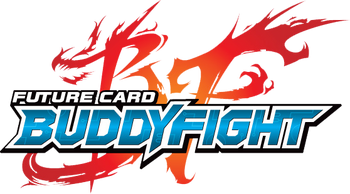 Main rules about how to play Future Card Buddyfight.

It is recommended to read these other pages to learn more about this game.

If both players achieve one of these conditions at the same time (ex. reaching 0 life points simultaneously due to an effect such as Big Surprise Pandora), the game ends in a DRAW.

As per the above conditions, if a card effect activates when a player has been put under one of these conditions (ex. reaching 0 life when you have a card like Dragon Return System or Brave Equipment, Glory Seeker in play with their effect active), the game will continue until there are no more effects to resolve, and the player is still under that condition.

A deck must contain:

Each deck may only contain a maximum of 4 cards with the same card name (excluding the buddy monster), even if a card has a different ability or illustration.

If a card effect states that "This card is also regarded as X", only the name printed in the name box will count towards the "max 4 copy" rule (See: Super Lethal Formation/Rulings). Both cards will have the same name, and are viable targets for any card that may support them.

How to Read a Card 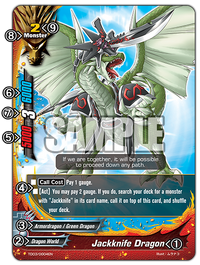 Currently, there are nine relevant properties of a card on the gameplay.

Both players start the game having 10 "Life" each. If a player's flag (such as Dragon Ein) modifies any of these conditions, the player must adjust them before raising the flag.

It is recommended to declare the beginning of each phase in case of use a card or ability. *See Note*

Repeat this process until a player fulfills a win/loss condition(s).

Note: Be sure to announce the beginning of each phase as this gives your opponent the opportunity to activate an effect. If the phase is not announced, the opponent has the right to declare their timing once you start an action. For example, if you begin the Attack Phase by resting a monster, but your opponent wishes to activate [Move], they may announce, "At the start of the Attack Phase, I move..." Take your time as rushing through phases can inform your opponent of your strategy, and will allow them to adjust theirs accordingly. Don't give up your competitive advantage by moving too quickly. Take your time and enjoy your Buddyfight!

During the Main Phase

You may use cards from your hand and repeat the following actions any number of times during your main phase.

Once the turn player is ready to begin attacking, he/she proceeds to the attack phase.

During the Attack Phase

Utilize all forces from the monster area and fighter area to attack the opponent!

During the Final Phase

If you wish not to, your turn ends. (Proceed to your opponent's turn. - Return to "Start Phase".)

1 of 11
Add photo
Retrieved from "https://buddyfight.fandom.com/wiki/Gameplay?oldid=454984"
Community content is available under CC-BY-SA unless otherwise noted.