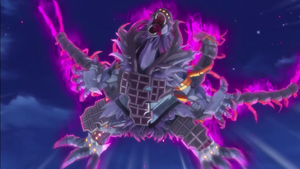 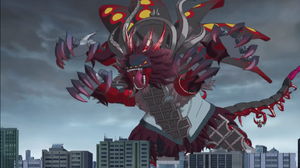 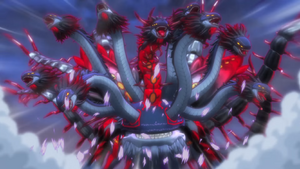 This article is about the character. For the card, see Great Fiend, Yamigedo.

"Yamigedo" is the main antagonist in the anime/manga of Future Card Buddyfight Hundred. He's the leader of Hundred Demons, and Ikazuchi's former "buddy monster" until he grew so powerful, he could technically buddy himself.

Before the battle with Hyakugen Yamigedo, it was revealed that Yamigedo spawns his offspring before he reunited with Bolt Fuchigami.

Yamigedo's appearance is that of a large armored, and robust beast, having multiple orange (sometimes glowing red) eyes, a huge mouth with a thick, purple tongue. He also has deity like features, grey hair with red-coloured highlights, and is covered in resilient armor. Yamigedo has three centipede-form tails which are used to break into the ground.

As 'Specter of Darkness Wasteland, O-Yamigedo', Yamigedo has evolved to become bigger and stronger. He now has two pairs of arms, his spines are longer, he now sports four red horns on his head, and has a new red and gray sinister-like color scheme. He also gains two pairs of wings with a color pattern identical to his eyes.

As Great Evil Deity, Hyakugen Yamigedo , he has towered over his 2 previous forms, making him the largest monster in the series so far, he has multiple heads with serpentine necks,(but one head stands among the rest due to that it has red color scheme on its neck and it has centipede-like legs on it and it has red horns). It stands on 4 limbs now and his body has a large mouth, once the mouth opens, there is a yellow "hive" where it has a storage of it's smaller "clones", it has 4 large wings and has 4 centipede-like tails.

Yamigedo has an insatiable appetite, having devoured four worlds and in the middle of a Buddyfight he was more focused on eating the Buddy Police building than on fighting. He appears to have an intense hatred for the Omni Lords and aims to devour them one by one.

At first, it seems that Yamigedo seems to get along with Ikazuchi and even showed Ikazuchi gratititude for releasing him by turning the entire Fuchigami clan to stone. However, it turns out that Yamigedo was actually using Ikazuchi and the latter's memories of knowingly releasing Yamigedo to get revenge on his abusive family were fake ones created by Gratos to get Ikazuchi to be Yamigedo's buddy.

Despite that thought Yamigedo does consider Ikazuchi to be his buddy. When Yamigedo evolved and Ikazuchi returned he didn't hesitate to turn against Gratos and return to Ikazuchi's side. When Ikazuchi attempted to turn against Yamigedo, he instead resorted to forcefully taking control of Ikazuchi's mind.

Yamigedo absolutely cannot stand losing, when he does he attempts to evolve into a stronger form and get a rematch against whoever defeated him.

Yamigedo is first seen literally eating a planet after it was destroyed by the Hundred Demons, according to The Omni Lords, it's the fourth planet they've destroyed. He was defeated by the Great 8 and was sealed away on Earth shortly after that, with his seal guarded by the Fuchigami Clan until Ikazuchi was tricked by First Knight of the Apocalypse, Gratos into releasing Yamigedo's seal. Then, the Fuchigami Clan was turned to stone and Ikazuchi had his memories altered by Gratos to believe he was abused by his clan and that he knowingly unsealed Yamigedo to get revenge on them.

Some time later, after the Hundred Demons and Ikazuchi arrived on Cho-Tokyo, they all settled inside a cave behind a waterfall where Ikazuchi drew on their power while talking to Yamigedo, who was in a spirit-like form. Ikazuchi then recruited Sofia Sakharov and Magoroku Shido to capture Tenbu.

In Episode 13, Yamigedo and Ikazuchi ran out of patience with "Death Shido's" failures and decided to devour Tenbu themselves. They were interrupted by Asmodai whom they recognized as an Omni Lord and defeated without much effort. After eating one of Asmodai's doubles, Yamigedo evolved from his spirit form to his true form. Before they could challenge Tenbu as their next meal, however Tasuku Ryuenji appears and challenges them as well. The fight goes mostly even until Yamigedo is called, when he did he released so much power that the Buddy Police barrier system collapsed and he along with Ikazuchi vanished. After the fight Count Dawn explained how the Omni Lords defeated Yamigedo in the past. Shortly after that, he and Ikazuchi return to attack the Buddy Police, and after Ikazuchi defeats Gao, Yamigedo finally eats Tenbu.

After Ikazuchi was defeated by Gao, he and Yamigedo seemingly disappeared. However Gratos soon revealed that he took over Ikazuchi's place (later revealed to be on the moon) and has prepared a sanctuary for Yamigedo to evolve into an even stronger form.

When Tasuku traveled to the future, it was revealed that if Yamigedo isn't sealed again, Earth will turn into an apocalyptic ruin ruled by the Hundred Demons.

Sometime later Yamigedo awakens on the moon evolved into Specter of Darkness Wasteland, O-Yamigedo and devours the Eight Omni Lords, and their allies and proceeds to head to Earth from the Moon. However, before he Crashes Tasuku, Gao, and the Eight Omni Lords escape and prevent him from crashing into Earth. Shortly afterwards Ikazuchi Takes back his Core Deck Case from Gratos. Gratos orders Yamigedo to devour Ikazuchi, however Yamigedo instead chooses to go back to Ikazuchi and helps defeat and devour Gratos taking Gratos's abilities for himself.

Ikazuchi then attempts to use his clan's sealing technique to slow down Yamigedo for the Omni Lords to seal him. However, the technique only works for a moment and Yamigedo proceeds to completely possess Ikazuchi. He then proceeds to Fight Gao but flees when he sees he cannot win and proceeds to create a cocoon on Aibo Academy for himself to evolve once again.

He was later evolved into his final form: Great Evil Deity, Hyakugen Yamigedo. He battle against Bolt and his offspring before they were devoured by him.

He was finally destroyed by Gao and the other Omni Lords in the final battle after Bolt and the present Yamigedo were saved.

"Great Eater": Yamigedo is capable of consuming a wide varaiety of different materials without any ill effects, such as skyscrapers, various buddy monsters and even the core of a planet. In H Episode 30, it was revealed that his stomach is connected to an alternate dimension which is where monsters like Fifth Omni Dragon Lord, Tenbu, Second Omni Demon Lord, Asmodai's half and Gratos were found having their power absorbed by Yamigedo.

"Metamorphosis": When Yamigedo is capable of it, he can undergo a transformation into a larger and more destructive form. This was first showcased in H Episode 13, where after consuming Asmodai's clone, he underwent a transistion from his corporeal spirit form in his current form. It is unknown what specifically triggers a metamorphosis, though it seems to occur once it has acquired enough energy from what it has consumed so far.

"Dark Energy": Yamigedo's presence by itself generates a large amount of dark energy, which is powerful enough to cause Core Gadgets to malfunction and destroy them when Ikazuchi defeats their users in a Buddyfight.

"Immense Strength": Yamigedo is incredibly strong. He can crush buildings with ease and can even outpower Fifth Omni Dragon Lord, Tenbu and devours him.

"Mini-Clones": He is capable of creating smaller, tadpole-like clones of himself. Normally, these clones exist in within Yamigedo's Stomach Dimension, acting as either pseudo-antibodies to those who managed to infiltrate it or as a digestion method seeing as many were around Tenbu's body, but they can be brought to the real world as seen by the one Shido was holding.

"World-barried breaking": Yamigedo's influence causes the barriers between worlds to slowly break over time. Currently it has caused some monsters to travel to other worlds. If Yamigedo is never sealed again, all worlds will eventually cease to exist and Earth will be reduced to a post-apocalyptic wasteland.

"Petrification": Yamigedo can turn living creatures into stone, first seen with the Fuchigami clan. With enough power Yamigedo can create strings that petrify anything they touch, and the stronger he becomes the further those strings expand until eventually they cover the entire planet Earth. Petrified victims are still alive and can be un-petrified if Yamigedo is resealed or through the use of Disaster Force.

Yamigedo with his buddy, Ikazuchi

Yamigedo in his CGI form.

As "Specter of Darkness Wasteland, O-Yamigedo" 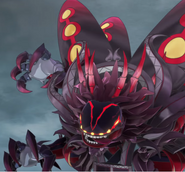 Yamigedo descending from the Moon

Yamigedo's Avatar in the form of Ikazuchi & INV Omni Lords

Retrieved from "https://buddyfight.fandom.com/wiki/Great_Fiend,_Yamigedo_(character)?oldid=431275"
Community content is available under CC-BY-SA unless otherwise noted.