Decks
J Genesis is the human secondary antagonist of the Future Card Buddyfight Triple D anime. As the president of the Gaen Financial Group during the middle of Triple D, he held the WBC Championships in an American held stadium. He conducts buddy monster research behind the scenes trying to replicate the powers of various monsters Kyoya has his sights on. His buddy monster is Fake Replica Weapon, Gemclone .

He is voiced by Seki Toshihiko (JP).

After Kyoya stepped down from head of the Gaen Financial Group at the end of Season 1, through a unanimous vote from inside the company, Genesis took the position of President. He uses his financial wealth and power in order to hunt down and kill monsters whose souls and lifeforce was sucked into a husk of a Hero World Material named "Gem" creating copies of cards known as Armored Battle Demon, Zetta and Gemclone. He sets up the WBC Cup and monitors the events, however Kyoya is given some behind the scenes leeway.

On the day of the opening ceremonies, Genesis introduces the tournament in a small speech, later reminding Kyoya on how he hates wasting time. In the middle of the night, he is seen watching various fights of Gao using Bal Burst Smasher to replicate it, setting his sights on Abygale, Vanishing Death Hole next.

His first match begins as he is able to OTK Gaito flawlessly through the power of his copied Bal Burst Smasher. That night while Gaito is distraught, he lures Abygale to the arena and shows him a private video of Kyoya explaining Abygales creation. Horrified of what he really is and how Genesis says the pain he has caused Gaito, causes Abygale to leave, unknowingly leaving enough data to sample Abygales Impacts.

In his second match, while Tasuku was ready for Bal Burst, he was not ready for all the spells Genesis had up his arsenal and his newly formed Abygale Impacts. Through the fight, Jack accused Genesis of how he has created his Zetta card and Gemclone itself artificially by using a natural Hero World material named "Gem". As Tasuku was about to finish Genesis off, Genesis defended himself and countered with consecutive Abygale impacts. After the match, he was confronted by Gaito as to why he has the Abygale impacts, as Tasuku and Gao enter backstage, exposing how Gara ratted Genesis out.

Gara's interrogation has said that Genesis collects monsters and kills them, using their body and other vitals to create Gemclones ultimate power. As Gara is a full criminal, his testimony cannot be used, but the rage Gao felt for all the sacrificed monsters and Genesis`s lack of care for them sparks his rage for their final match.

J Genesis appeared on TV, he is asked by the reporter about his Gemclone, to which he quickle he can "Show it here and now" - It's the Gemclone, "Origin Breaker!".

Night before the Final Match, J enters his Gemclone lab, and found Gao and Bal in it, he told both to leaves, but Bal question him what's up with "Weapon" things, to which J remains silent. After the two leaves, J looks at Origin Breaker, and mutters that it's impossible he can communicate.

During the Final. Gemclone communicate with Bal, much to J's surprise as he puts no effort into developing communication abilities on Gemclone, but it is revealed that the soul and effort J puts into creating "Gemclone" is the thing that give Gemclone such abilities. He is also told that Gemclone likes him, and in fact, loved him for creating it, as a "Father", who would give his child his/her "Life". After the match, he is arrested, only to mutter that his effort was in fact, the most wasted effort.

Sometimes later, he is questioned about Kyoya's project by Tasuku. Only to get only its name - Project "Triple D". Sometimes after that, Devil Destroy Bigmachine under Kyoya's command kidnapped him from the Police. He is then brainwashed by technology implanted.

After Gaito and Abygale reached the building, the brainwashed Genesis stand guarding it, muttering that he will eliminate all the intruders. He then used Armored Battle Demon, Zetta to drive Gaito back. After Gaito commented on his action as if he is a Zombie, a real zombie Ozon-B appeared. Gaito used Ozon-B as a distraction as he intrudes in the tower, only to found out that Ozon-B's power is no match against J Genesis. Having no other choice, Gaito buddyfghts J Genesis.

J Genesis starts unusually by calling a non Impact Monster Demonic Battle Demon, Zetta, only to reveal that it was all a set up as he unleashed Hard Impact Tactic. As he use Origin Breaker, it tries to resist J's order, which also waver J. However, the mind control is so strong that it suppressed his sense and Origin Breaker finished Gaito, but Gaito evolved his Dragon Force into "Style of Retaliation". And use it to counterattack by taking down the saddened Origin Breaker. After the fight, Origin Breaker talks to its "Father" as J ask if Origin Breaker is willing to call him that. He then asks his "son" for a rest.

He makes a cameo apperance in episode 49 , watching Gao and Kyoya's match in prison. It is implied that he was rearrested for escape, or he deliberately turned himself in.This could imply that he had a change of heart.

A new superhero who suddenly appeared in Hero World. Even though he resembles a Darkhero who tried to start a revolution, his identity is shrouded in mystery. "Gemclone", a being that imitates and reproduces everything, has transformed to be his cloak. "Gemclone" has created a pseudo world called the "Mirror World" inside the cloak, and from there, superheroes resembling those from Hero World are summoned.

.... He used to be someone consumed by greed. He sacrificed many lives for the sake of his own ambition and avarice. Is this the punishment to face and compensate for his sins? What does he wish for at the end of everything? Confronting all the dead that he left in his desire for everything, he thinks. He can't find an answer yet. But he can still move forward. Because there is now a buddy who supports him. 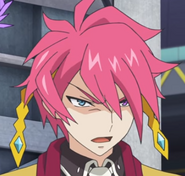 It is not an effect for when he is Impact Transformed. He has Heterochromia