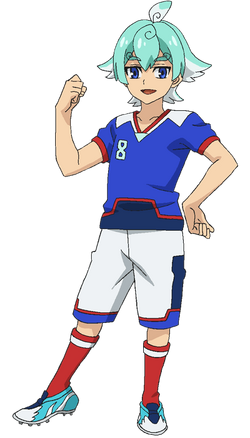 Kanata Ozora is a 6th-grade student at Aibo Academy and the Star Dragon World representative for the World Buddy Masters tournament. His buddy is Quintessence Crystal Dragon, Athora.

He is voiced by Yūko Sanpei (Japanese) and Griffin Kingston (English).

Kanata is an average sized boy with turquoise hair with white tips and dark blue eyes. His casual outfit consists of a white shirt under a white and blue short-sleeved jacket, blue knee-length trousers, red sneakers and a white and blue sweatband on his right wrist. During soccer matches and buddyfights, he wears a light blue soccer jersey with a red collar and seams and white shorts in the same color pattern. His shoes are cleats in white and turquoise.

When doing an impact, Kanata gains Athora's prism dragon powers and has a snowflake birthmark on his left cheek and crystals cover his feet and legs.

Kanata is described as a young genius with perfect scores in all parts of his life, including sports, academics, and buddyfighting. He seems to be happy and smiles often, but has a strong undertone of sadness and loneliness. This is because his perfection robs him of the joy to achieve something, drives away people and leaves him with no perspective for his future. He even quit buddyfight for some time, because there was no one fit to hold a candle to him. He won every match he ever played without losing a single lifepoint, which earned him the nickname "No-Damage Fighter". His best friend is his buddy monster, Athora.

Kanata makes his first appearance in advance of the World Buddy Masters tournament, when Tasuku Ryuenji, who was chosen as Star Dragon World representative, searches for a worthy substitute because his duties at the Buddy Police don't leave him enough time to participate. But Kanata refuses the offer because he quit buddyfighting due to a lack of challenging opponents. Only after the occasionally present Gao Mikado managed to win a penalty challenge against him, Kanata agrees to a deciding fight against Tasuku. Tasuku loses without being able to deal damage, but nevertheless, the battle relights Kanata's fighting spirit and he agrees to become the Star Dragon World representative.

During the tournament, Kanata maintains his series as "No-Damage Fighter" and wins every fight sovereign. He even manages to beat Gaito Kurouzu and his new Instant-Win-Impact "Death Count Requiem" in a thrilling match and advances to the grand finale against Gao.

The final match went as expected and Kanata forces Gao into a corner, as he struggles against the impenetrable wall of the Prism Dragons. Then the impossible happens and Gao and Batzz are able to destroy Athora and inflict damage to Kanata. However, Kanata doesn't seem to be bothered that his streak has ended, on the contrary, he seems glad and excited. In a surprising comeback, Kanata stops Gao's attack and leaves him on the brink of defeat...

The second part of the final match, Kanata has given everything he's got to defeat Gao, but in the end, he accepted his first loss to Gao Mikado in the final round of the World Buddy Masters, and learns what disappointment feels like.

After the World Buddy Masters, Wisdom shows up and gives Kanata an offer a chance to join him, but Kanata refuses the offer and decided to buddyfights him. During his buddyfight with Wisdom, he felt anger and rage inside when facing Wisdom, in the end, he was defeated by him.

During his time at training camp, he and his friends rescue the rest of their buddies, however, they were tricked by Guru Bunbuku. Guru gives Kanata and Athora advice in order for his and Athora's relationship to blossom.

In episode 22 it is revealed that he knows Keisetsu of the Sword Arts.

In episode 30, he had a flashback about how he and Keisetsu have their first buddyfight.

While searching for clues in episode 32, he later runs into Keisetsu and gets defeated by him.

During a flashback of episode 33, he used his skills to start buddyfighting, and enter a shop tournament, but his opponent was Keisetsu. He defeated him without taking damage, after that, he decided to quit buddyfight after what happened with Keisetsu. He finally gets his confidence back thanks to Gao and friends.

In the rematch of episode 35, Kanata tried to reach Keisetsu through his feelings, but in the end, he finally defeated Keisetsu with his new impact: Direct Dynamic Diamond Overhead!!. After the battle, he wanted to beat him again one day.

In episode 40 he and Gao faced off in another buddyfight between two Thunder Empire buddies, with Kanata coming out as the victor.

In episode 50, he challenged Sakate Onigashira to buy Gao and his friends some time to find Chibi Panda, and Kanata manage to defeat Sakate with Direct Dynamic Diamond Overhead!!.