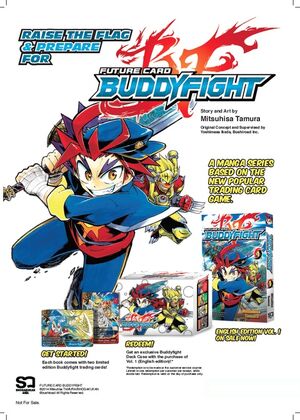 Future Card Buddyfight (Manga) is written by Mitsuhisa Tamura, and is published by Shogakukan and CoroCoro Comics .

Original concept and supervised by Yoshimana and Bushiroad Inc.

The story centers around the trading card game of Future Card Buddyfight and its main character Gao Mikado. This series does not follow the story of anime but features same original characters and new characters as well.

These side series are created by different authors. These series are comprised of spin-offs series and one-shot-spin-off.

Retrieved from "https://buddyfight.fandom.com/wiki/Manga?oldid=453567"
Community content is available under CC-BY-SA unless otherwise noted.