This article is about the character. For the card, see Nanomachine Ninja, Tsukikage. 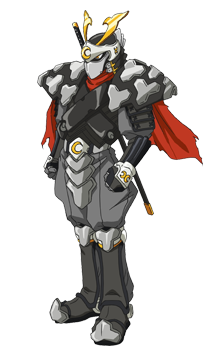 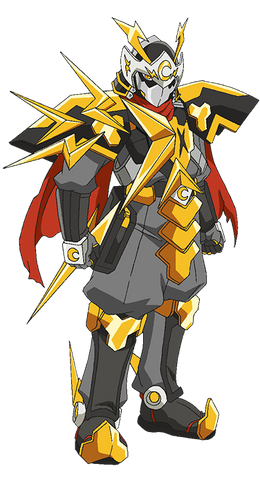 "Nanomachine Ninja, Tsukikage", or simply "Tsukikage" is a character in the anime/manga of Future Card Buddyfight, and the buddy monster of Zanya Kisaragi.

Tsukikage is a Ninja Warrior wearing a black and silver Armor with a helmet with a moon symbol and a red cape.

Tsukikage's personality can be hard to describe due to him not talking, but he appears to greatly care about the Kisaragi brothers, especially his Buddy, Zanya. This is shown when he shed a tear after Zanya was defeated by Genma. His loyalty to the Kisaragi brothers is so strong that he could partially break free from Elf Kabala's mind control and break his no-talking rule to protect them.

While he is is able to speak, he chooses not to as it is part of his ninja training. Instead, he communicates using scrolls. Saying "Nin!" when he does so to draw the attention. At times Zanya can be annoyed by his "comments".

Tsukikage appears along with Zanya as part of Team Kisaragi during the ABC Cup. After Zanya defeats Doai in the ABC cup, Zanya asks him to investigate Magoroku Shido. Tsukikage eventually discovered that Shido had kidnapped Genma Todoroki and stole his "Koryuken" deck, then he and Zanya sent a note with their findings to the Seifukai and helped Zanya take the deck back.

Tsukikage continued fighting alongside Zanya for the rest of the ABC cup and during Zanya's revenge match against Genma. When Zanya is brutally defeated right after thinking he had won, Tsukikage immediately carried an unconscious Zanya away and dropped a tear after seeing his Buddy devastated from having lost the fight against Genma he had anticipated for so long.

In Episode 45, Tsukikage is revealed to have an extra strong bond with Zanya, and manages to come out of his mind-controlled state that was brought upon him by Elf Kabala. It is also revealed, as Zanya so clearly stated, that Tsukikage can indeed speak, but chooses not to in order to strengthen his willpower as a form of training.

Both buddies in the first preview

Tsukikage in his mini form

Tsukikage being controlled by Elf Kabala