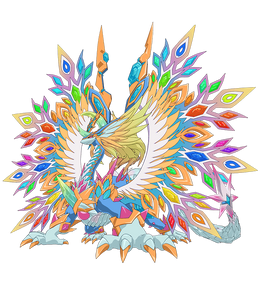 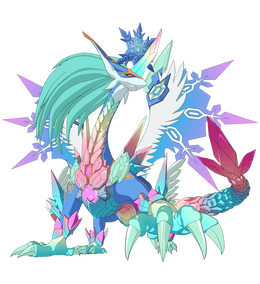 He is voiced by Takahiro Mizushima (Japanese) and Rylan Strachan (English).

Athora takes form of a beautiful Prism Dragon covered in crystals and he have red eyes without black pupils and black eyeliners. In this form, he has rainbow wings and his tail is colorful, but his mane stays the same color. He also have a blue crystal snowflake over his head, and his teal horn becomes a rainbow crystal horn only sharper. His claws also becomes sharper.

In his SD form, he is not being covered in rainbow crystals and he takes form of a small blue dragon with pink eyes with black pupils, and his wings and tail become small and light blue. His horn is teal and have a light green snowflake on top of his head instead of floating over it. His mini form also has paws instead of rainbow claws, and having a light green chest plate.

In episode 32, his disguise was two pink hairbows, and pink blush lipstick.

In his Heavenly form, he is covered in multiple rainbow crystals and his eye color stays the same. His new form also has new rainbow wings with gold and white feathers, and his mane changed from green to a golden mane. His Heavenly form has a greenish-yellow crescent moon and his snowflake changed colors from blue to teal and gold. His claws has become polished and golden, and he have a yellowish-blue crystal sticking out of his chest along with his pink pearl.

Athora is very modest and very protective of his Buddy Kanata, which is similar to Tasuku's and Jackknife's relationship. He doesn't appear to be a proud warrior like Jack, however, as he was perfectly content to simply hang out with Kanata and doesn't actively try to encourage him to find enjoyment in Buddyfighting though he was happy when Kanata found it on his own. This is seen both inside and outside of buddyfights, as he always encourages Kanata and plays with him, and by how he always announces that he will always protect him. Athora also shows a sporty side, because both he and Kanata love soccer.

In episode 2, it shows Athora playing soccer with Kanata outside the school and in the end of the episode he and Kanata were being secretly monitered by Tasuku and Jackknife.

In episode 3, it is shown that Athora and Kanata were taking a break from a soccer game at Aibo Academy. Soon after Batzz came disturbing the school grounds and attacking Kanata, Athora shows up and attack him with force. After Tasuku and Kanata's buddyfight, he and Kanata both decided to participate in the World Buddy Masters.

Throughout the World Buddy Masters, Athora and Kanata manage to defeat all their opponents without Kanata taking any damage, even managing to avoid Gaito's impact Death Count ~Requiem~. However, Gao Mikado and his new buddy, Demon Lord Dragon, Batzz manages not only to damage Kanata but defeats him in a long and difficult battle. Although Kanata loses his first buddyfight, he is more excited to fight Gao once again.

However, shortly after Wisdom the Owner of the Chaos Control Company appears with his buddy Gear God VII. Wisdom then proceeds to take the Mirage Card Gao Received in the World Buddy Masters and turns it into the new flag, The Chaos. Kanata Challenges Wisdom Due to Gao being unable due to Batzz flying off earlier. Though Kanata and Athora manage to do some damage to Wisdom, Wisdom and his Chaos monsters overwhelm and defeat them.

In episode 32, he and Kanata are challenged by Keisetsu to a buddyfight. Athora did his best to defend Kanata, he is overpowered by Keisetsu's offensive skills.

In episode 33, Athora talks to Gao, Batzz, and Chibi Panda about Kanata's past and how he stopped playing buddyfight. After talking to Kanata about how fun buddyfight is and how to defeat Keisetsu together, Athora finally earned his power of Overturn and evolve into new Heavenly form.

Retrieved from "https://buddyfight.fandom.com/wiki/Quintessence_Crystal_Dragon,_Athora_(character)?oldid=484158"
Community content is available under CC-BY-SA unless otherwise noted.