Raremaro Tefudanokimi is the president of Sengoku Academy's middle school student council and was one of the antagonists of Season 1 of the Future Card Buddyfight anime until his loss to Gao in which he saw the errors of his ways. He fights with Legend World and his buddy monster is Demonic Beast, Grendel.

He is voiced by Kenjiro Tsuda (Japanese) and Hans Wackershauser (English)

Raremaro has purplish hair and light skin, he isn't that tall, only being around until Kemura's chin or there about.

Raremaro shares many traits with Magoroku Shido. Both are presidents of the student council at their respective schools and hide a nasty and antagonistic personality behind a calm and cool attitude. He's not against using dirty tricks to obtain cheap victories such as sneaking a "Hate Card" into Kemura's Deck to give him an unfair advantage without even telling Kemura about it. He also designed a deck made mostly of Hate Cards in an attempt to take down Gao's Dragon World deck.

He strongly dislikes Rouga Aragami for taking away his place as Sengoku's best fighter.

Raremaro is the student council president at Sengoku Academy. When the students of Aibo Academy arrived to ask about Rouga kidnapping Kiri Hyoryu, he was unwilling to say anything until Rouga appeared and offered a 5 vs 5 match between Academies. He reluctantly agreed as everyone else agreed. He watches Rouga defeat Tetsuya Kurodake with a One-Hit-Kill and comments that his opponent was weak.

The second fight pits Kemura against Genma Todoroki. Raremaro is confident that Genma has no chance of winning, as he prepared a special trick for Kemura. Kemura finds a Dragon Vanquishing Sword, Balmung in his deck, which he was sure he wasn't supposed to have. Raremaro says he added the card to help him beat Genma, showing no concern at all about Kemura's guilt of having won unfairly. He feels proud about this scheme, but Rouga states that it was a dirty trick for a cheap win, angering him.

He volunteers to fight against Gao confident that he'll win easily and declares that if he wins he'll recover the "best fighter" tittle that Rouga took away. Rouga agrees but then states Raremaro has no chance of beating Gao. Raremaro had designed his whole deck to counter Gao's Dragon World deck, but is shocked to see Gao using Magic World instead which makes most of his cards completely useless. However, he continues to remain confident about his victory and underestimates Magic World's low powered monsters as well as Gao's unusual strategy of increasing Raremaro's Gauge and then dealing damage to himself, but then is surprised to see Gao's real strategy was to setup Gotcha! and Drum's Megablast Bunker.

After losing, he has a sudden change of attitude and leaves the fighting area.

He made an appearance again in episode 46 with Kanahebi, showing him the invitation to the Gaen Cup. 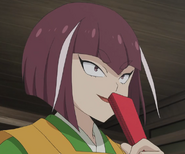 Add a photo to this gallery
Retrieved from "https://buddyfight.fandom.com/wiki/Raremaro_Tefudanokimi?oldid=472955"
Community content is available under CC-BY-SA unless otherwise noted.