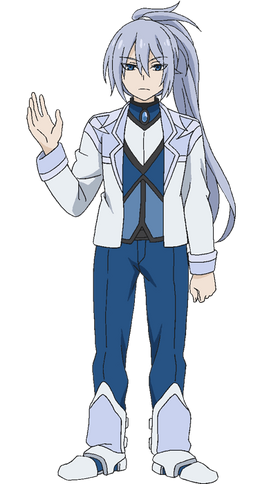 Shosetsu Kirisame (霧雨正雪) is in charge of the disciplinary committee of Sengoku Academy and is one of the four demon generals. He is a second year that is rumored to be the strongest in both sports and academics. He often refers to the academy as "sen-cad"

He is voiced by Todo Mai (Japanese) and Phil Futon (English).

Shosetsu is a very serious and rather cold person, keeping a serious face that expresses little to no emotion at all times. He isn't very talkative, staying silent most of the time and only talks with short phrases with a low voice tone.

Shosetsu takes Buddyfights seriously and is a tad more talkative when fighting and was capable of giving a short smile when fighting against Rouga Aragami during a flashback. He can also be merciless when fighting, and knows when to accept defeat as shown during his fight with Rouga.

He's interested in Rouga's ability to make card's abilities real and shows some concern for Kiri Hyoryu. After accepting the Dark Core, he becomes influenced by its dark power and becomes malevolent and power addicted and was willing to hurt others to achieve victory. After the Dark Core is destroyed, he felt guilty and was willing to let himself be arrested, but Gao allowed him to correct his mistake by once again fighting honorably with his own power.

After the Aibo vs Sengoku match, Shosetsu became slightly more friendly, and reassured himself that power is something that one must find by themselves. He still holds some respect for Rouga, as he kept secret the fact that Rouga is the criminal fighter "Wolf".

Shosetsu has long silver hair and blue eyes. He wears a blue uniform with armor padding on his feet, hips, chest and shoulders. In episode 25, he was seen with a sword in his belt, and later, it is revealed that this sword is his Buddy, Immortal Sword, Durandal, his scabbard being Shosetsu's core gadget

Shosetsu was training near the Photon Metal mines when "Wolf" attacked them and becomes interested in his ability to make cards real.

He first appears on-screen episode 25 when a sengoku student refused to show Gao Mikado around despite losing to him. He shows them around the school and lead them to the student council office where he explains his role. He later agrees to join Rouga and the other 3 demon generals in a 5-vs-5 against Gao and his friends.

His first opponent during the match is Kazane Fujimiya, whom he defeats almost effortlessly while showing no mercy. His next opponent is Zanya Kisaragi, while Zanya did put a better fight,Shosetsu's ability to continously switch items to protect himself while attacking and his Buddy bypassed Zanya's Secret Sword, Shooting Star with its destruction prevention ability and defeated Zanya. With Shosetsu' victories, Aibo Academy only has 1 fighter left. Before his fight with Gao, Sophia offers him the Dark Core which he accepts, but in the process he is affected by its dark influence.

At first, Shosetsu fights normally against Gao, but when he tries to equip Sword of the King, Excalibur it rejected him causing him to become angry and start using Disaster Force. Asmodai reveals he knows about the dark core and its dangers, and summons other Buddy Monsters to counter it, but they are all quickly defeated. Tasuku Ryuenji and Tsurugi Takihara interfere and Tasuku uses Future Force to destroy the Dark Core, snapping Shosetsu from its influence.

Shosetsu was ashamed of his actions and was willing to be arrested, but Gao points out that he is no longer influenced by the Dark Core and allows Shosetsu to resume the fight. Shosetsu succeeds in summoning Excalibur this time and almost beats Gao, but Gao ultimately wins.

He later returns to compete in the Gaen Cup as a member of Team Sengoku. His opponent was Rouga, during the fight, Rouga's Disaster Force was activated on its own. While Shosetsu lost, he did manage to make Rouga question his loyalty to Kyoya before getting hit by a Disaster Force enhanced item attack which presumably injured him.

During the semi-finals, Shosetsu, Raremaro and Kanahabi were watching the match between Purgatory Knight and Noboru Kodo. When his identity revealed to be Tasuku, what he was about to say was blocked when he grew suspicious that Examiner Sueroku Shido had something to do with it. During Rouga's fight with Zanya, he figured out that Zanya knows about Rouga being Wolf and shared it with his teammates but told them to keep it a secret.

He later appears in the WBC Cho-Tokyo preliminaries where he ends up losing in a match against Gao.

Retrieved from "https://buddyfight.fandom.com/wiki/Shosetsu_Kirisame?oldid=453510"
Community content is available under CC-BY-SA unless otherwise noted.