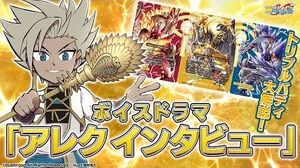 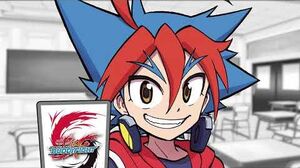 Voice Drama An Interview with Alec!
Add a photo to this gallery

Today, Bushiroad released a Voice Drama, that featuring Alec. In this Video, you will learn about Triple Buddy power, and see Alec's personality.

Video text translation made by @buddytrans!

Subtitles video made by @garagewolf

Alec: Well, well! You must have good eyes if we caught your attention. Well, then! Listen to our words carefully. Our name is Alexander Ankh, the crown prince of the Ankh Kingdom, and the man who will create a new legend for this world! Yuga: That's why they call you the Ace of Legend, right? Alec: Mikado Yuga! What are you doing here?! Yuga: I heard your deck got stronger, so I came to check it out! Alec: Trying to investigate your enemy, are you? Yuga: You're not my enemy, you're my rival. Alec: Hmph. Well, I suppose I can allow it. Feast your eyes on this new power of mine, and tremble in fear at the sight. Yuga: I'm looking forward to it!

Alec: My deck, Legend of Double Horus, has two Buddies--Magma Horus and Freeza Horus, which allows me to do a Double Buddy Call. It's an overwhelmingly strong deck. However, that is not my deck's true form. Yuga: What do you mean by that? Alec: You see, I do not have merely two Buddies. Yuga: Wait, so you mean-- Alec: That's correct! I have a third Buddy, Thunder Deity, Voltaic Ra, and only with all three is my deck truly complete! And its name is... Legend of Triple God! Yuga: Legend of Triple God?! So, Legend of Triple God means, it's a legend and it's got triple as many gods as usual?! Alec: Don't repeat it so many times! Yuga: Ahaha... It just sort of happened. Alec: More importantly, you... Do you actually understand what any of those words mean? Yuga: I know that "triple" means there's three of them. Alec: And a legend is simply a myth or other tale to be remembered by the masses. A god, of course, is a deity. And so, it is a legend of my three gods. Wait, don't you also use a Dragod?! Yuga: Oh! So the 'god' part of Dragod meant that kind of god! Alec: You... You should come to the Ankh Kingdom for middle school. My country will actually be able to educate you. Yuga: No...I think I'll pass. More importantly than that, tell me about how strong Voltic Ra is! Alec: What do you mean, more importantly...? Well, fine. I shall Luminize!

With a thunderclap that cracks heaven and earth in two, we shall raise the curtain on a new legend! Luminize! Legend of Triple God!

Alec: When I Buddy Call Thunder Deity, Voltaic Ra, I can also Buddy Call Ice Deity, Freeza Horus at no cost. And with Freeza Horus I can also Buddy Call Flame Deity, Magma Horus, and with his effect, I can destroy two of my opponent's cards and draw two cards. This is my Triple Buddy Call. Yuga: So that means you can gain 3 life via the Buddy Gift, right? Alec: That is correct! This is simply another privilege of one who carries three Buddies. Yuga: So what happens after that? Alec: You should already know that with Freeza Horus and Magma Horus's effects, they cannot be destroyed or returned to hand by effects, and they gain Triple Attack. Yuga: Yeah, they're super strong! Alec: And with Voltaic Ra added to their numbers, they all get an additional 10,000 added to their attack power, an additional critical, and Penetrate! Yuga: What?! They even get Triple Attack? Alec: It's too soon to be surprised just yet. Yuga: You mean there's more?! Alec: Don't underestimate my Buddy's power. As long as Voltaic Ra is there, my opponent cannot use effects to stand their cards. Yuga: ...Huh? Alec: Ahahaha! I see, so you were so surprised you once again forgot how to use your words! Yuga: No, no, no! Isn't that, like, way too strong? Even with my G Boost Base and G Boost Craft I can still only attack one time! Alec: Heh. Yuga: Don't you 'Heh.' me!

Alec: At any rate, now you understand that while I am using my true power, your deck has no hope of winning against mine. Yuga: Grr... Well, there still has to be a way to get past that! I won't lose to you, Alec! Alec: Be sure to put up a good fight for me. It'll make crushing you more satisfying. Yuga: Alright, then let's get to fighting right away! Alec: As you wish.

Alec: ...Well, esteemed guests, surely you too understand the true strength of our deck now. We crafted this deck for the sake of crushing the Ace of Games, Mikado Yuga. Now, if you will excuse us... Yuga: Hey, Alec! Get over here already! Alec: Does he truly want to taste defeat so quickly...? Heh. He truly is quite a strange fellow. I shall simply have to show him every aspect of my Triple Buddies' power. Hahahaha!

Retrieved from "https://buddyfight.fandom.com/wiki/User_blog:Ner%C3%B832/Voice_Drama:_An_Interview_with_Alec!?oldid=468479"
Community content is available under CC-BY-SA unless otherwise noted.